The day that Jessica came into the office she was worried. Not only was she worried, her mother was worried as well. Jessica is a 26-year-old healthy runner with a penchant for training and a high tolerance for pain.

She was in the middle of training for an upcoming marathon. Her mother had noticed her limping about and recommended that she go see somebody. She came in because she was worried about her Achilles’ tendon. She had heard that could be very serious.

I asked her about her training routine. She said that she typically ran 8 miles at a time on a very hilly course area. She felt that this was a good training strategy given that the upcoming marathon would contain a lot of hills. She wanted to make sure that she would be ready. But running up and down all of those hills was aggravating her condition.

She could remember exactly when her pain started. It’d been getting progressively worse. She pointed at the back of her ankle, but it wasn’t right at her Achilles’ tendon where she had the most pain. It was actually deeper in the back of the ankle.

I poked and prodded and couldn’t find any pain or tenderness anywhere around her Achilles’ tendon. However, if I squeeze the back of the ankle, away from the Achilles’ tendon, she had a great deal of pain and tenderness. Next, I put my thumb underneath her big toe. I had her try to push down with her big toe as hard as she could. And when she did, she had the same kind of pain in the back of the ankle.

We took some x-rays and noticed that she had a portion of bone that was not completely fused to the back of her talus bone. This is a condition known as os trigonum syndrome or posterior ankle impingement syndrome.

We got an MRI that reassured us that she had no issues with her Achilles’ tendon or the tendons to go to the big toe area. The flexor hallucis longus (FHL) tendon which pulls the big toe down against the ground when a runner pushes off can sometimes become torn or irritated and have the same type of presentation. But her FHL was fine.

However, not everything was fine. There was a great deal of swelling with in the talus bone (the bone that connects the foot to the ankle), as well as an accessory bone at the back of the talus called the os trigonum. These two pieces of bone in her ankle were connected with some soft tissue attachments which were very irritated.

Os trigonum syndrome is not a common injury. However one study showed that runners who to do a significant amount of downhill running have an 18% chance of acquiring posterior ankle impingement syndrome. And when it does occur, it can be debilitating.

Runners who develop this problem might have no pain at all when walking on level ground. It starts to become painful when they walk on uneven ground. It becomes much worse when they run on hills. This is because the foot needs to point further down (plantarflexion) and the soft tissues can become irritated or even get caught and pinched between the talus and the calcaneus (the heel bone). This causes a great deal of inflammation and pain.

Not only will there be pain, but many will also have swelling and stiffness in the back of the ankle that may extend all the way to the Achilles’ tendon. That is why many patients who think they have Achilles tendinitis might actually have this problem instead.

Although this is not the most common running injury we see, it is important to get it treated. Chronic inflammation can lead to pain that interferes with activities ranging from normal walking to running. Anytime you suspect an Achilles tendon injury, it is important to be evaluated.

Even though Jessica did not have an Achilles’ tendon injury she did have an injury which could be treated effectively. In most cases, immobilization and physical therapy can calm it down. In rare cases, surgery is needed to take out the accessory bone and inflamed tissue. In any event, with this type of problem it is never a good idea to stick your head in the sand and foolishly hope you’ll cross the finish line in record time.


Dr. Christopher Segler is an Ironman Triathlon Finisher and award winning foot doctor specializing in elite athletes. His podiatry sports medicine house calls practice is based in San Francisco. You can reach him directly at 415-308-0833. You can register for a FREE membership and will receive the monthly newsletter “Finisher’s Circle,” which provides expert advice on increasing your running efficiency and preventing injuries and foot pain by visiting http://www.AnkleCenter.com .
a blog post by My Running Doc at 6:07 PM

CAN I RUN WITH HEEL PAIN? 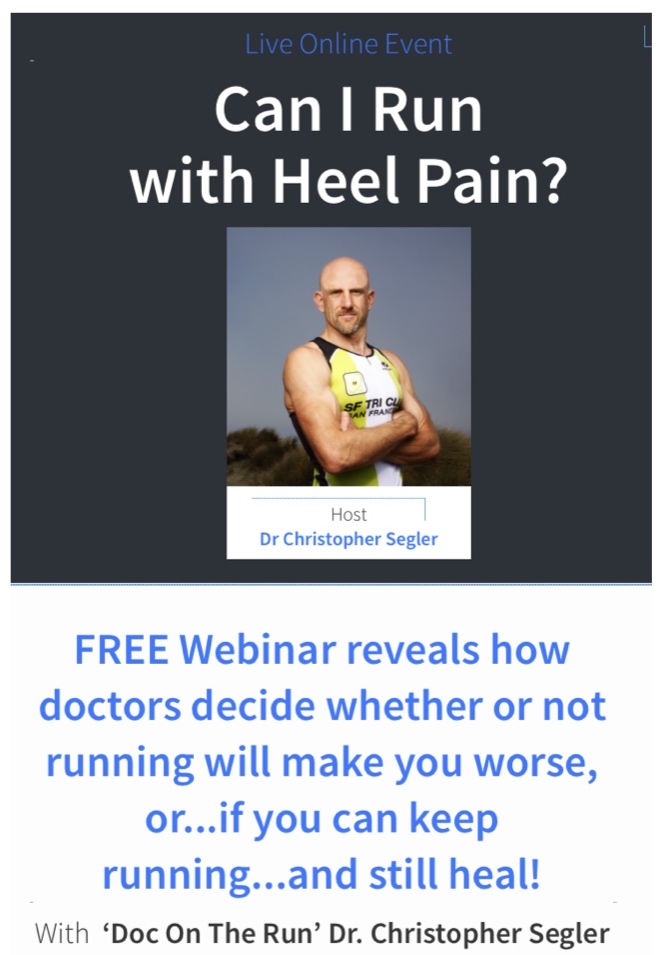 If you have a running injury question and want a fast answer from a true running expert...you can get an answer today! Just click on the link to set up your call with Doc On The Run!
60 minute call: $350